The TRON 2.0 Killer App Mod is a fan-made mod for the PC game TRON 2.0, released by Buena Vista Interactive (now known as Disney Interactive Studios) and Monolith Productions. (The Killer App Mod will not work on the Mac OSX version of TRON 2.0, or the PC demo version.) The mod was created by members of the Living Dead System Operators team and other invited members from the fan community. Headed by TronFAQ, the mod will include contributions from many individuals including Zook_One, Kain-Xavier, 9VoltChicken, Jademz, Raven, win3k, Mor.Evil-1 and Load"*",8,1.

The first Version 1.0 of the mod was released March 22nd, 2008 but was withdrawn shortly thereafter for various reasons. It was decided to work on an improved version of the mod for another release. The improved Version 1.1 mod was released April 16th, 2010. It is being treated as an Open Beta, due to the enormous number of changes made, and the need for testing by a wide audience to catch any unexpected problems that may have been introduced. At least one more version with additional improvements and possible fixes is planned to follow at a later time.

The mod is not to be confused with the Xbox or Gameboy Advance versions of the game, despite the similar name. It is only for the PC version. Though it does obviously take some inspiration and the title from those games.

According to TronFAQ, "The KILLER APP Mod is a merger of Kain-Xavier's KMX Skins Mod, Raven's Light Cycle Colors Mod, and my Orange Light Cycle Unlock Mod, but with plenty of additional enhancements."[1]

Using the run in a window option 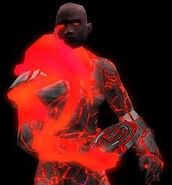 Example of new skin colors, notice the changed circuitry textures.
Add a photo to this gallery

Retrieved from "https://tron.fandom.com/wiki/Tron_2.0_Killer_App_Mod?oldid=39575"
Community content is available under CC-BY-SA unless otherwise noted.