The Grid is a world of Programs that appears in Kingdom Hearts 3D: Dream Drop Distance, and is the second world in the series based on Tron, the first being Space Paranoids. It is based on the events of Tron: Legacy, which is the most recent Disney film to become a world in the Kingdom Hearts series.

Sora comes to in this world and, seeing his clothes, believes to be back in Space Paranoids. He spots a Recognizer and chases after it until several Black Guards attempt to arrest him, identifying him as a stray program. He escapes and soon encounters Rinzler. Though they're about to fight, Rinzler suddenly leaves. Sora then meets Kevin Flynn, his son Sam, and Quorra, who is fascinated by Sora's Keyblade. Flynn explains that the figure that Sora encountered was Tron, reprogrammed by CLU to serve him. Sora decides to restore Tron, and with Quorra, he heads to Rectifier to retrieve Tron's source code.

They search the Rectifier, but don't find the code, and instead are ambushed by Rinzler. Sora attempts to get Rinzler to remember his past as Tron, but Rinzler suddenly counterattacks, and kidnaps Quorra. Sora is then confronted by an unknown youth, accompanied by a revived Xemnas, who explains that this is the world where Ansem got the data for his own computer, then muses about the nature of data and memory, asking Sora if he is sure his memories are his own before leaving through a Dark Corridor. The mysterious youth opens the doors behind Sora, cryptically telling him that data cannot dream and that he is no longer in the Realm of Sleep. Sora is blown out by the wind. When he awakes, he finds himself in the Disk Wars stadium, where CLU offers to return Rinzler to Tron, on the condition that Sora hand over the Keyblade.

Sora defeats Rinzler, and for a moment appears to Rinzler just as he did in Space Paanoids. Sora reprograms him, but CLU appears and attempts to take out Sora with his Disk. Rinzler manages to push Sora aside and deflect the hit, but the ricochet takes out the floor beneath him, causing him to fall below the stadium, failing to reach Sora's outstretched hand. CLU then leaves to recapture Rinzler, saying he'll deal with Sora later. Sora is saddened from failing to save his friend, but Quorra comforts him.

Shortly after, while considering Xemnas's words, Sora finds the Grid's Keyhole and unlocks it.

When he arrives, Riku notices his clothes have changed, and he wonders if the world is special. Several Black Guards find Riku and arrest him, taking him aboard a Recognizer along with Sam Flynn, who explains where Riku is. CLU pits Riku on the Light Cycle track, and has him race against several Black Guards. During the race, a Dream Eater arrives and attacks, but Riku defeats it, and blasts a hole in the wall to get out of the race.

He meets up with Sam, who tells him about his father, who has been stuck on the Grid for twenty years, hiding from CLU. The two of them head for the Portal leading to the real world, where Sam plans to delete CLU. Sam goes on ahead for a bit, and Riku later catches up with Sam, Kevin, and a catatonic Quorra. The group head for the Underground Docks to take a Solar Sailer to the Portal, and on the way Riku watches Flynn repair Quorra while he talks about the nature and origin of the ISOs, of which Quorra is the last, and how his and CLU's search for perfection led to their destruction. Riku reflects on how Flynn's story compares to Xehanort's, how their single-minded curiosities led to destruction and pain.

CLU's forces located them and force them onto a new course, but Quorra gets herself captured to give the others a chance to reach the Portal. Sam and Riku head off to CLU's Throneship to recover Flynn's Identity Disc and rescue Quorra, while Flynn goes to commandeer a ship. Although they recover the disc, Rinzler arrives with Quorra in custody. Sam and Riku attack Rinzler, with Riku knocking him off the ship with a Wall Kick. They take Quorra and join Flynn on a glider, which they take to the Portal.

There, they encounter CLU, who summons the Dream Eater from the Light Cycle track to stop them from going further. Riku takes on the Dream Eater in battle and destroys it. While Flynn baits CLU with his disc, Sam and Quorra head for the Portal. CLU discovers that Flynn switched discs with Quorra, and attempts to jump the now-open bridge to the Portal. Sam uses Flynn's disc to activate the Portal, but when CLU tries to enter it, even with Riku blocking his path, Flynn suddenly draws CLU to him and absorbs him, disappearing in the process. The Portal closes with Sam and Quorra on the other side, and the Keyhole appears to Riku as he contemplates the significance of Portals.

Sora's appearance in The Grid 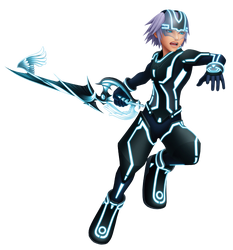 Riku's appearance in The Grid
Add a photo to this gallery

Like in Space Paranoids, Sora and Riku are converted into data and change forms accordingly. The forms resemble the outfits worn by other characters in the film. They both wear dark blue suits with light blue circuitry and visors characteristic of participants in the Grid's Disk Wars competition. Sora's form also slightly resembles his Kingdom Hearts II design, but without the prongs.

Retrieved from "https://tron.fandom.com/wiki/The_Grid_(Kingdom_Hearts)?oldid=38201"
Community content is available under CC-BY-SA unless otherwise noted.