TRON Solar Sailer is a videogame developed by Mattel Electronics that was released for the Intellivision.

In the first part of the game, you control a Solar Sailer that must reach a transport beam that will take you to the next sector. To get there, you must travel along the energy beams while watching out for Game Tanks and Recognizers. The player can fire shots at both these targets, but these will drain energy from the beam you're on, and when the beam is out of energy, it's game over. Make sure you switch beams often so that you'll stay in the game. Once you reach the transport beam, you must enter the code that Alan gives you at the start of the sector in order to proceed to the next sector. When you get all the way to the Master Control Program, the second part of the game starts, the "decoding phase". To retain control, the MCP must make continuous data transmissions. Large zeroes and ones will fly out at the player, who must intercept and capture them with Bit, then enter them correctly into a display. Stop enough transmissions, and the player will overload the Master Control Program...and win 50,000 points! 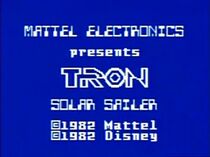 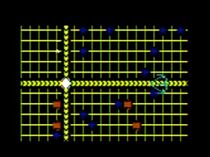 Phase 1 of the game.

Community content is available under CC-BY-SA unless otherwise noted.