Space Paranoids was an 1981 arcade game created by ENCOM software engineer Kevin Flynn. It was one of the very first arcade games to feature 3D graphics and soon became one of the most successful video games ever conceived.

In 1981, Kevin Flynn, one of ENCOM's brightest young software engineers, set up his own private memory file at his computer terminal. He began to write a program for a video game called "Space Paranoids" and other video games such as Matrix Blaster, Vice Squad, and Light Cycles. However, Flynn's overtime work and bragging drew the unwanted attention of another software engineer: Ed Dillinger. One day, Flynn went to his terminal to read up his file for Space Paranoids, but the file had gone missing. Three months later, Ed Dillinger presented ENCOM with five video games that he claimed to have invented: Space Paranoids, Light Cycles, Vice Squad, Astro-Gunner, Matrix Blaster. After Flynn tried to convince the Board Of Directors that Dillinger stole his work, they fired Flynn and promoted Dillinger to Executive Vice President, and later Senior Executive.

In 1982, Flynn enlisted the help of Alan Bradley and Lora Baines to break into ENCOM in search of proof of Dillinger's crimes. He successfully breached the Digitization Lab and began his search, only to be detected by the Master Control Program and transported to ENCOM's Grid. There, he helped Tron escape from the MCP and assisted his fight against its forces. Ultimately, Flynn jumped inside the MCP to help Tron insert his Identity Disc. While inside, Flynn found the missing Space Paranoids file deep within the MCP's memory.

In the arcade version of the game, the controls are a trackball (for aiming) and a joystick for movement. There are also ammunition recharge stations.

The object of the game is to go through the levels and to achieve as many points as possible by destroying Recognizers. The total number of points a person can achieve is 999,000 pts, a record currently held by the gamer, FLN.

How To Play Space ParanoidsEdit 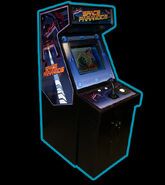 Space Paranoids screenshot
Add a photo to this gallery

Retrieved from "https://tron.fandom.com/wiki/Space_Paranoids?oldid=41592"
Community content is available under CC-BY-SA unless otherwise noted.