Tron Wiki
Register
Don't have an account?
Sign In
Advertisement
in: Games, Games by Kevin Flynn, Canon,
and 7 more
English

This article is about the light cycles game. For other uses, see Light Cycle (disambiguation).

Light Cycles is a video game created by Kevin Flynn. The game is played by driving a vehicle known as a light cycle, which leaves an impenetrable barrier called a Jetwall. The object of the game is to make all of the other opponents drive into the jetwall, effectively derezzing the cycle. The last person still on their cycle is the winner.

Light Cycles was a popular game by ENCOM and was one of the many games created by Kevin Flynn that were plagiarized and stolen by Ed Dillinger. Flynn broke into the ENCOM Tower headquarters to access a direct terminal so that he can find the evidence that Dillinger stole his games. However, the MCP noticed his presence and digitized him into the Game Grid. While in ENCOM's mainframe, he met Tron and Ram, where they were forced to play gladiator video games, including Light cycles. Since Flynn wrote the game program, he knew the game's routines and was able to survive and escape the light cycle grid arena. To escape he made an enemy light cycle racer crash into the wall. The hole that resulted provided them with an escape route.

Flynn decided to devote time from video games to building the Tron system. He still kept the original gladiator games from the old mainframe; however, they were played for entertainment purposes rather than played to the death. The light cycle game was vastly improved and the arenas were upgraded with ramps, half-pipes and spirals. 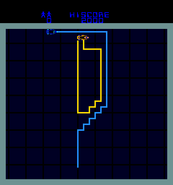