Clicking on the darker blue links will direct you to the articles in The Keyhole. Click the Back button to return to the Tron Wiki page.

Kingdom Hearts II is the third game in the Kingdom Hearts series. It picks up one year after the events of Kingdom Hearts: Chain of Memories. Sora, the protagonist of the first two games, returns to search for his lost friends. Like the previous installments, this game features a large cast of characters from Disney films and Final Fantasy games. Organization XIII, a group introduced in Chain of Memories, also reappears to impede Sora's progress.

Affiliation with the TRON series[]

This video game is noted for featuring Tron and the TRON Universe, Space Paranoids, as one of the levels, albeit stating that the original system was copied and recreated as Hollow Bastion OS. This lets Sora, Goofy and Donald interact with Tron and help him to defeat Sark and the MCP. A modified version of the light cycle game is one of the world's minigames, though crashing other players into walls is not the point (or indeed, fatal to Sora); players must instead attack heartless versions of programs as they pursue while avoiding Walls that are generated from the Grid.

The digitization tech that allows the heroes to enter Space Paranoids inside the computer, makes further appearances at both the start and end of the game implying that the technology was further upgraded and refined. It is used to transport Roxas into a virtual recreation of Twilight Town that looks and responds just like it, and without the need to take on the appearance of programs. Towards the end of the game, in The World That Never Was, a portable version of the Digitising device is used in an attempt to digitise the entirety of Kingdom Hearts, although this attempt fails due to the massive size, power and unpredictability of the Hearts, in which the device and its creator is thought to have been destroyed, but is later found in the dark realm by Aqua about a year later. 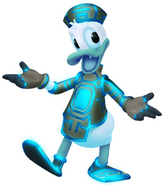 Tron, as he appears in KH2. 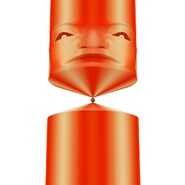 The MCP, as it appears in KH2.

Sark, as he appears in KH2.