ElecTRONica was an interactive nighttime dance party that took place at Disney's California Adventure Park, part of the Disneyland Resort in Anaheim, California. It took place every Friday, Saturday and Sunday night at the Hollywood Backlot section of the park. ElecTRONica started in October, 2010, and was based after a similar nighttime event that called Glow Fest, which took place in the same area. ElecTRONica featured dancing, performers such as LASERMAN, a 3D sneak-peak of the film TRON: Legacy, a mock-up of the End of Line Club, and a recreation of Flynn's Arcade, where guests could play classic arcade games (such as TRON and Space Paranoids), as well as TRON: Evolution.

ElecTRONica was temporarily closed for refurbishments in early September, 2011, and reopened in October. It permanently closed April 15, 2012, to be replaced by a similar "nighttime celebration" themed around Alice in Wonderland, the Mad T Party.

While the show is not expected to reopen at its normal venue in the near future, Laserman, the Tron City Dance Crew, and other ElecTRONica regulars reappeared briefly at Hong Kong Disneyland's Tomorrowland during October, 2012 for Haunted Halloween.

Eckert, according to DCA Park Canon, was the host of ElecTRONica and the new owner of the End of Line Club. His outfit was nearly exactly the same as Castor's, but his hair and facial markings differed. Theories as to who Eckert really was were varied, but he once spoke about his "idiot brother who got himself derezzed," setting Eckert up as a sibling of sorts to Castor and providing a reason why he was now the 'owner' of the End of Line Club. Eckert was portrayed by different performers on different nights, but always had the same appearance and patter; on one night his place was taken by a woman in a similar costume, but though she filled the same role as Eckert, she introduced herself as Ada, a name that has since been heard in TRON: Uprising. Eckert's name first appeared, listed as Combatant 8, on the Disc Wars scoreboard in Tron: Legacy.

Before guests could "enter TRON City," a pre-show called a Power Surge was performed set on a stage just outside the entrance to ElecTRONica (or "The Portal," as Eckert invariably called it).

The show started off by introducing the events of the original TRON film, via scenes played on a screen above the stage. After a brief introduction, the introduction to Journey's "Separate Ways" began as dancers dressed in 80's attire cavort before an Arcade mockup. Following this, "The Game Has Changed" briefly played, introducing the "Grid" section of the pre-show, where dancers dressed as programs performed a much more gladitorial dance with clashing discs and martial arts moves.

But even these fearless gladiators, the voiceover would then explain, needed a place to reenergize themselves, along with "someone to guide them, to lead them, to rock their world like it's never been rocked before." Accompanied by two Sirens, Eckert would enter on cue, waxing eloquent about "the wonders of Tron City" and the fun that awaited the audience beyond the Portal, while leading the programs through one of three dance routines, each performed to a different Daft Punk song.

During afternoon pre-shows, Eckert and his programs—combatants, Sirens, and Servers—would teach the audience a dance set to Daft Punk's "Around the World," and invite them to return later when "the sun goes down and the Grid lights up." The evening pre-shows would end right before ElecTRONica was due to open for the evening, and Eckert would lead the audience in a ten-second countdown and then announce that the Portal was open and everyone could "enter the Grid."

Dance was the name of the game at ElecTRONica. Music, ranging from Skrillex to Nicki Minaj, reigned at most points during the evenings, cued up by DJs occupying a central dais while programs danced on platforms and circulated through the crowd. Eckert frequently appeared on the dais to encourage the dancers, call for more music, or introduce an event. While the dancing went on, programs also taught guests hula-hoop tricks and held disc-throwing competitions.

Based on the night club located inside the Grid during Tron: Legacy, the End of Line Club served glowing alcoholic and non-alcoholic beverages. Among the alcoholic options were Glowjito mojitos and blinking Digitini martinis. Non-alcoholic choices included Coke Zero and Laser Light Lemonade. A nearby food truck offered nachos and chocolate cake.

In this replica of the arcade seen in the Tron films, guests played vintage 1980s video games such as Tron, Battlezone, Centipede, Donkey Kong, Pac-Man, Pole Position, Red Baron, and Zaxxon, a game that had previously existed in the original Tron film. All games required a token, or the equivalent of a quarter, to play. Just outside the arcade, guests could also play TRON: Evolution and TRON: Evolution-Battle Grids.

On the final night of ElecTRONica, Eckert announced that "for our own cyber-survival, the Portal into the Users' world must be closed," but allowed one more song first—fittingly, a remix of Daft Punk's "One More Time." Afterwards Eckert, shouting to be heard over the crowd's enthusiasm, thanked the Servers, Sirens, and Users, but was interrupted by prompts projected on the wall: "Commence Immediate Deresolution," ">Terminate Program Electronica: >Execute" and ">Are You Sure? >Confirm," followed by an electronic countdown in the voice of the MCP. In the resulting confusion, Eckert and the other programs left the scene, and most of the lights cut off, with the words "END OF LINE," projected in giant letters on the wall, signaling that the Portal had finally closed.

One of the dancers

LASERMAN, one of the performers

The End of Line Club, with Flynn's Arcade in the background

The center of the event 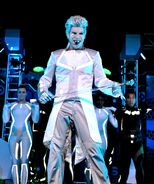 Inside the Merchandise Booth

Community content is available under CC-BY-SA unless otherwise noted.
Advertisement