Not to be confused with the Atari 2600 and Intellivision game Tron Deadly Discs.

Discs of TRON is the second arcade game based on the 1982 Disney movie TRON.

While the first TRON arcade game had several mini-games (Gridbugs, Light Cycles (game), entering the MCP cone and Light Tanks), Discs of TRON is inspired by two sequences in TRON; the scene where Flynn plays against Crom in the Ring Game and Tron derezzing the four other programs in Disk Arena.

In the movie, both players stand on top of a platform made of five concentric circles that disappear if an energy pellet, thrown from an arm extension touches a target between both platforms. Discs of Tron uses several platforms, and the player must beat Sark by throwing discs at him (a maximum of three at a time, which would return to the player) and eventually derezz him or push him outside the platforms. While the player, along the discs, can use a deflector, Sark has two more weapons: a chaser and a super chaser, that can only be destroyed with the discs.

As the game progresses, the player is given different configurations of platform rings to jump and stand on. The video game also uses a spinning knob that is used to move a mouse-like cursor around the playing field so you can judge where the discs will deflect off the walls and on later levels the knob can be pulled up or pushed down depending on the height of the platforms.

This game was released just before the video game crash of 1983. It was ported to the Commodore 64. In 2004, it was released again in the Game Boy Advance game TRON 2.0 Killer App. On February 13, 2008 Disney Interactive released an updated port on Xbox Live Arcade for the Xbox 360.

In the Competitive Arena

According to Twin Galaxies, Davide Bagenski, of Syracuse, NY, USA, scored a world record 418,200 points on June 28, 1986 during the 1986 Video Game Masters Tournament. 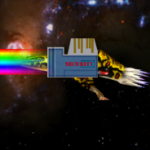