The word is derived from deresolve, first referenced in TRON when conscripts received their identity disc:

"If you lose your disc, or fail to follow commands, you will be subject to immediate deresolution."
―Sark[src]

The word can be used as either a transitive or intransitive verb. For example, the quote:

shows the word when used as an intransitive verb.

When programs derez in TRON, their circuits fade to darkness and they compress into a flash of light which winks upwards before disappearing entirely. Sometimes, they are enveloped in a red or yellow glow before they disappear. If they slowly derez from grievous injuries or from being decompiled, their circuitry may pulse slowly, dimming until it fades out, and their data scatters into the surrounding terrain as they deresolve.

When programs derez in TRON: Legacy, they shatter into thousands of cubical voxels, which scatter on the ground like broken glass. The cube-like voxels appear to remain on the Grid after deresolution. The shattering of fast-moving vehicles, due to the energy involved in their destruction, appears similar to a liquid splash which rises from the impact and then dissipates. Both voxels and energy splashes reflect the circuit color of the derezzing individual or object.

Deresolution in TRON: Uprising is much the same as it is in TRON: Legacy. However, it is also mentioned that programs can be derezzed "bit by excruciating bit," as opposed to an instantaneous and comprehensive shatter. This may refer to the decompiler used to suck both energy and data out of programs, leaving them empty, colorless husks which shatter into dust instead of voxels.

Note: The following section contains information that appears in the TRON 2.0 storyline, which has been classed as non-canon with the TRON mythology and takes place in an alternate timeline.

The MCP believed that a user such as Kevin Flynn could be killed on the Game Grid.

A user on Flynn's Grid can be injured, and presumably derezzed. However, a damaged user bleeds, as Sam Flynn did when Rinzler slashed his arm, instead of shedding the glass-like bits created when programs are damaged.

Clu derezzing as the MCP takes his functions away from him.

Crom derezzing as he falls down into an endless pit. 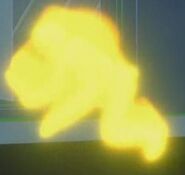 Dumont slowly derezzing as the MCP takes away his functions.

Sark derezzing along with the MCP. 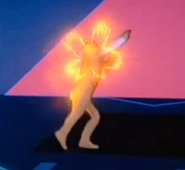 Programs derezzing at the hands of Black Guards

A Light Cycle derezzes behind Sam. 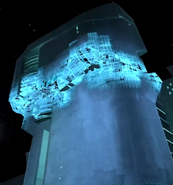 A tower after being hit by a tank arrow

A Black Guard is derezzed.
Español
Community content is available under CC-BY-SA unless otherwise noted.
Advertisement